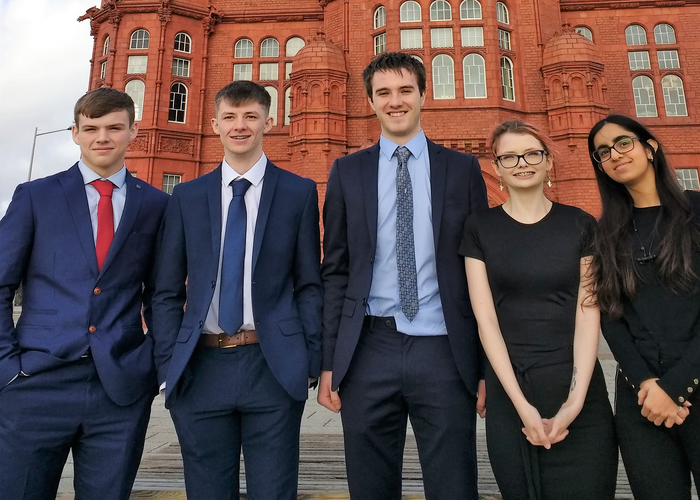 STUDENTS showed they mean business in a national contest for mental health awareness.

A team from Coleg Cambria participated in the Inspiring Skills and Excellence in Wales Competition for Enterprise at the Pierhead Building in Cardiff Bay.

Sponsored by Ken Skates AM – Minister for Transport and the Economy, and a former learner at Deeside College – the event was open to all FE institutions and sixth forms in Wales.

The five-strong group from Cambria – which has sites in Wrexham, Deeside, Northop and Llysfasi – were tasked with identifying ways of better promoting and supporting mental health and wellbeing for young people aged 16-25.

Coleg Cambria’s Enterprise Champion Lynn Williams was “incredibly proud” of the group and said: “They worked really well together and presented some terrific ideas.

“They and the other groups came up with different solutions to what is a very real problem nationwide, so the judges were impressed.

“Mental health awareness is more important than ever before, and the students recognised that. It was a rewarding and vital task, and they were a credit to the college.”

Their solution to the problem was to run events for young people and their families to reconnect by leaving their mobile phones at the door and playing board games or doing physical activities and sports.

This was designed to reduce the isolation for the young person and reduce the negative effects of social media by taking away the temptation to focus on their mobile phone.

They produced a structured business plan and presented them to a panel of judges, who responded with scenarios that could impact upon their proposals.

“The learners then had hour to go away and come back with ways the venture could be taken forward in the face of the challenges they set,” added Lynn.

“They all coped well under pressure and lived up to their team name – Stronger Together.”

The results will be announced on March 19 at Sophia Gardens Cricket Grounds in Cardiff.