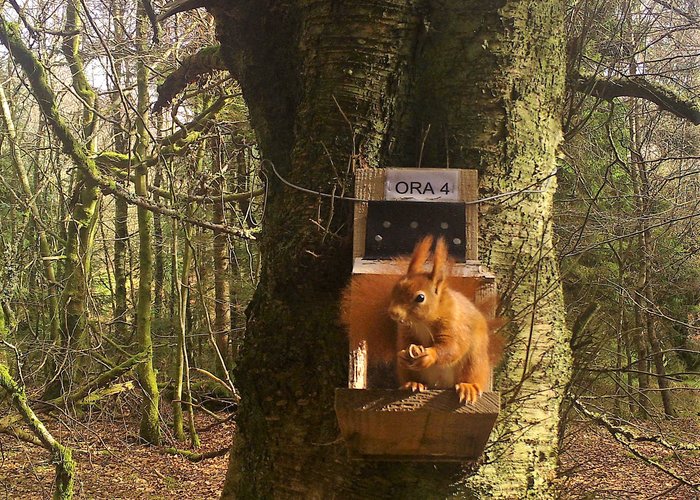 STUDENTS have joined forces with a wildlife project help save the red squirrel population from extinction.

Level 3 NVQ Animal Management learners at Coleg Cambria Llysfasi built feeders and nest boxes for the animals and monitored their progress at enclosures in Clocaenog forest, near Ruthin, during a reinforcement project.

They have been supporting the work of Red Squirrels Trust Wales and Natural Resources Wales, who are fighting to save the species following a century-long decline in numbers.

Cambria students have also been helping to save the local hedgehog population in partnership with Hedgehog Help Prestatyn and are exploring a new dormouse project, as the tiny creatures are also disappearing at an alarming rate.

Llysfasi lecturer Kirstie Fraser said the students are gaining vital experience as part of the conservation initiatives, and proud to be playing a part in their survival.

“The Clocaenog project has been a success so far with several captive-bred red squirrels released back into the wild to mix with the remnant population and boost genetics,” said Kirstie.

“They have been brought into the forest from various locations with the help of the Welsh Mountain Zoo in Colwyn Bay, and other breeding centres.

“The learners have also built feeder boxes with cameras trained on them so we can follow the squirrels’ progress, and they’ve cleaned and collected branches and greenery for the enclosures.”

She added: “Following health tests, the red squirrels were fitted with radio collars. Students were taught how to track the movements of the squirrels in the forest and then to analyse the data.

“It has been a brilliant project for them, and most importantly in trying to reverse the huge population decline.”

The red squirrel is officially classed as ‘Near Threatened’ in Wales, England and Northern Ireland but is a common sight in forests across Scotland.

The main cause of their demise was the introduction of grey squirrels in the 19th century; this species carries a Parapoxvirus disease, which does not appear to affect their health but does kill red squirrels, and they also out-compete the reds for food and other resources. A loss of woodland has played a major role as well.

Becky Clews-Roberts, who was Red Squirrel Ranger for the Clocaenog forest project, thanked Coleg Cambria for its support of the scheme.

“I would not hesitate to ask them for help again,” she said.

“They are a very hard-working group and take an interest in what they are doing. Many, many thanks to Coleg Cambria Llysfasi for your help.”

To support the red squirrels project and find out more, visit www.clocaenog-rst.org and https://www.redsquirrelsunited.org.uk/

Visit www.cambria.ac.uk for more on the wide range of courses and qualifications available at Coleg Cambria.