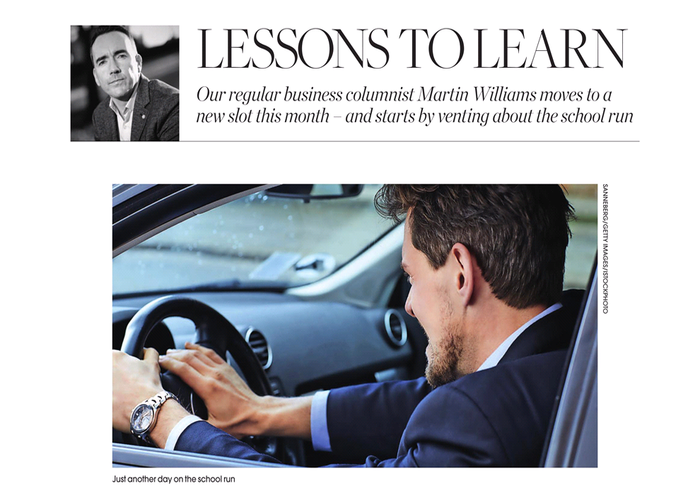 What a way to start the day.

For me, this routine journey is evocative of the 1980s video game, Paperboy.

Just replace the weaving bicycles and stray cats with drivers who can’t indicate and parents in pyjamas, shuffling their offspring to the bus stop before running to the nearest convenience store.

I think we really need to give ourselves a good talking to, or, to be more direct – these people.

I’ve written in the past about the total lack of consideration swallowing community spirit and sapping polite, decent members of society of all energy and hope.

Half of you reading this will be nodding in agreement, the other half will consider me a cretinous whiner.

You could be justified in thinking that.

“Let it go, chillax.” I do try, but as a man hurtling into middle age with the patience of an overlooked Spaniel, I struggle.

Mellowness hasn’t descended on me quiet yet. The world won’t allow it.

Anyway, the school run. This three-mile assault course begins and ends with myriad potholes, the junction from hell and the bridge of literal sighs.

A couple of things I have noticed along the way. About 80% of the children yomping the pavements are staring at their mobile phones and not the road ahead. It’s a real safety hazard. For them, and the rest of us.

Back to the road. There’s the driver you let through, who literally won’t lift a finger in return. Nobody wants to be flashed of a morning, but I’d take that over ignorance.

Barge your way between those two vehicles, that’s the ticket.

Car park is looking full. Yes, once again the six spots have been taken up by three hatchbacks and an errant 4×4. Stay calm, everyone.

Not easy. We’re all exhausted and fed-up before the sun has had a chance to rise.

I won’t even go into detail on the other joys of modern motoring; the abuse of parent and child spaces, tailgating, excessive speeding in urban areas, driving in headphones.. the list is endless.

I don’t mean to be judgemental, but to be blunt, if you’re offended by the above, you’re no doubt one of the culprits. In which case, take heed.

Look around and please think of others, even if the sole reason is to stave off future rants and brighten my mood.

It is quite depressing to be subject to the sneering arrogance of the everyday in 2020. I won’t even blame politics. It’s certainly not generational. It’s attitude.

At the opposite end of the scale, I had the great pleasure of sitting down with the founder of a long-standing Flintshire business in past weeks and discovering what makes it tick.

I won’t name the man in question, or his charming family, as he was one of the most humble and unassuming individuals I’ve met in a long time, but I came away genuinely moved by the firm’s attitude towards people. Staff, customers… everyone. There is some consideration left out there, even when profits and pressure are involved.

A real breath of fresh air, and the encounter left me with a spring in my step.

Until I got in my car the next morning, obviously.