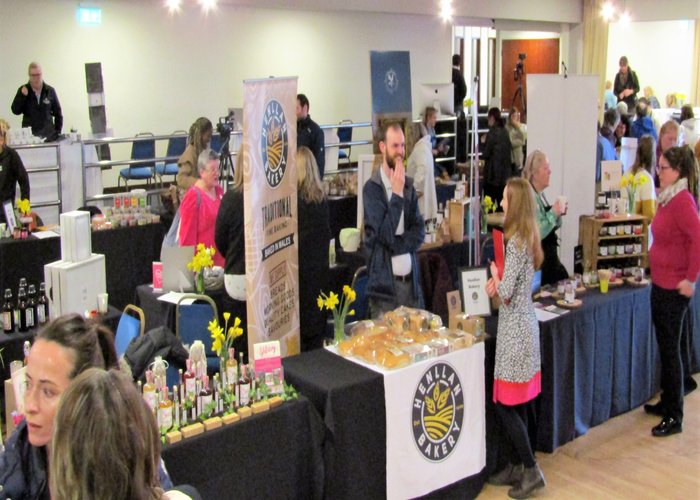 Independent and artisan businesses from across the sector attended the annual Blas Lleol/Meet the Producers event, this year held at Theatr Clwyd in Mold.

Supported by Flintshire and Denbighshire councils – the event was part of Denbighshire Council’s March for Business – and sponsored for the first time by the Federation of Small Businesses (FSB), producers signed deals and forged relationships with new contacts in north east Wales and beyond.

Among them was Debbie Handley of Mostyn Kitchen Garden, Holywell, who said: “We only make what we grow; it’s a labour of love, like for most businesses here today.

“We are all trying to raise the profile of locally sourced products and are celebrating that with events like Blas Lleol/Meet the Producers.

“I’ve made a lot of new contacts, including stockists and training opportunities, so it’s been a rewarding experience.”

Marina Midolo of Marina’s Italian Cookery, based in Cyffylliog near Ruthin, was in agreement.

“This is the third time I’ve attended Blas Lleol and think it’s a great way to catch up with other food and drink businesses,” she said.

“If you work on your own it’s important to gauge the reaction of customers and fellow producers, and this was a brilliant platform to do that.”

Sharon Parry, owner of Pupcakes dog bakery in Wrexham, has been in business for eight years and brought something different to proceedings, with items aimed at animals rather than humans, including Bourbone and Doggestive biscuits.

“This is all new to me so I wasn’t sure how we would be received, but it’s been terrific,” she said.

“Pet health and nutrition is becoming more important all of the time and that’s been reflected in the orders we’ve taken, and the customers made. It’s a booming industry – dogs are now seen rightly as part of the family – but we have kept a local flavour to it, which I think people appreciate.”

Katharine Wilding, from Angel Feathers, grows fruit and manufactures gin on Moel Famau, on the boundary between Denbighshire and Flintshire, and only launched the venture last summer.

A chartered accountant by trade and a plastic-free champion for Mold, she says this opportunity was too good to miss and is “delighted” to have taken part.

“I’ve always shopped in local independent shops and used locally-sourced products so to now be in business and exhibited at an event like this is amazing,” said Katharine.

“People have come here to support local businesses, meet new people and make contacts. I’ve had the chance to speak to people in my position and with potential stockists, so it’s been very worthwhile.”

Joint co-coordinator Jane Clough thanked everyone for attending and revealed it had been their most successful Blas Lleol/Meet the Producers yet.

She said: “We’ve had a record number of food and drink producers here and a lot of people through the doors, including a wide range of hospitality firms, retailers, delis, hotels and B&Bs – there’s been a great mix.”

Her colleague Robyn Lovelock agreed and added: “What really counts is the deals that have been done and orders taken, and that’s been a huge positive from the feedback we’ve received.

“Thanks to everyone who came along and especially to the FSB and Flintshire and Denbighshire councils, it was a fantastic day.”

FSB Senior Development Manager Mike Learmond said: “It’s so important we support these types of events and bring businesses together to build relationships that will hopefully last for many years to come.

“I’m delighted to see such a brilliant turnout and we were proud to sponsor for the first time.”