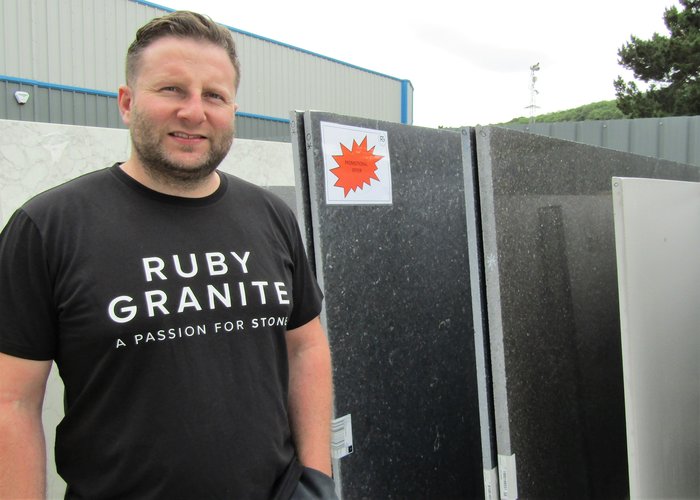 A MASTER craftsman is building a rock-solid reputation and growing his business by fusing traditional stonemasonry with modern technology.

Ross Salter was a chip off the old block; dad Cedric was a stonemason and inspired him to pursue a career in the industry.

After deciding academia was not for him, Ross set up on his own 15 years ago.

He built a workshop in the Conwy Valley before coming up with a name, Ruby Granite – a tribute to his late grandmother – and set to work on a variety of jobs specialising in stone.

Fast forward to 2019 and the 34 year-old employs 21 people in a 10,000 square foot facility in Mochdre, which includes a showroom and state of the art factory with more than 400 slabs in stock.

With the support of wife Gemma, owner of The Hair Shop in Colwyn Bay, the dad-of-one has become one of the most respected names in the sector.

But looking back, a lifelong struggle with chronic dyslexia and anxiety left him unsure which path to follow.

“School just wasn’t for me, I really struggled and didn’t enjoy it at all,” said Ross, from Deganwy.

“When I left and went to college to do engineering my heart wasn’t in it, and at the time I felt all I really wanted to do was work with my dad and become a stonemason.

“I did that for a while but wanted to stand on my own two feet and go it alone.

“I managed to get a bank loan, sold my beloved Volkswagen Golf and bought an old Transit Van. I got some tools and went for it, working every hour I could in a little shed near their home to get my own business up and running.”

He added: “One of my first jobs was at a house in Betws-y-Coed, where I did everything from railings to drains, plastering and stonework.

“The owner was going to pay a lot of money to have kitchen workshops made and asked if I wanted to do it. I bought some slabs, had them delivered, cut them all up and he was delighted with what I produced, so it went from there.

“The kitchen company saw what I’d done and started putting work my way, but it was quite slow as I would do all of the sawing, templating, polishing fitting and quoting, I had no lifting equipment other than an old forklift and a friend who would help me. It was a far cry from where we are now.”

Ruby Granite began to expand, moving to commercial premises in Trefriw before relocating to Quinton Hazell Enterprise Parc in Mochdre.

The company continued to grow so Ross took the decision to again move, but this time to a larger facility on the same site.

“The business had been growing steadily but it really took off when we came here,” he said.

“I went from one kitchen a week to an average of 17 a week now, which has seen us increase profits and our workforce.”

It has also helped raise their profile, including appearances on popular TV programmes such as DIY SOS, Grand Designs and Salvage Hunters: The Restorers in recent years.

While sales and the order book were booming, Ross admits he began to fall out of love with the industry before meeting Gemma 6 years ago and later becoming a Dad to Livia, now three.

“I was working long days, every day, and never having any time off,” he said.

“I stopped enjoying what I was doing but Gemma gave me a sense of perspective and helped me to find the balance we are all looking for.

“Of course, I still work hard but I try and find time for my family, which in turn reignited my passion for working with quartz and stone and being hands-on in the business.”

Stonemasonry is still at the heart of Ruby Granite, but advances in the tools and technology used means they are able to produce up to 25 kitchens in a 40-hour week.

“We used to make plastic templates of the worktops and then come back to the factory and cut around them and hand polish and machine them,” said Ross.

“Now we use laser templating and e mail the information direct to the factory the worktops can be produced before the template even gets back to the base!

“It used to take us days to produce kitchen worktops, now it takes us hours including the cutting CNC, polishing, hand finishing and quality control. We still put a lot of care and attention into everything, but it’s just so much quicker.”

Admitting his goal is to eventually double the size of the company, see a further rise in profits and grow organically, Ross is ambitious but happy to make steady progress.

A recent rebrand and new website have seen Ruby Granite present a new face to the world, and he has made a significant investment in its future, but not at the expense of quality.

“I have invested more than £700,000 into improving our infrastructure, including the administrative side and a refurbishment of the factory and state of the art machines and showroom,” he said.

“I want us to continue moving in this direction, but it’s important we enjoy ourselves. We experienced some growing pains and were probably expanding quicker than we could handle but investing in our people as well as the facilities has made a big difference.”

Ross added: “What we do is very rewarding and while some people may think granite and quartz worktops are very expensive and out of their price range that’s not the case.

“We produce worktops from £500 upwards, so it’s accessible, which is the approach we wanted to take.

“That goes for everything we do; a year or so ago this business was controlling me, and now I’ve wrestled that control back.

“We work hard, we make amazing products and we have loyal and supportive customers base.

“We’re in a very good place and I would like to thank all of our staff, past and present. We have an amazing team that will help us continue to grow.”