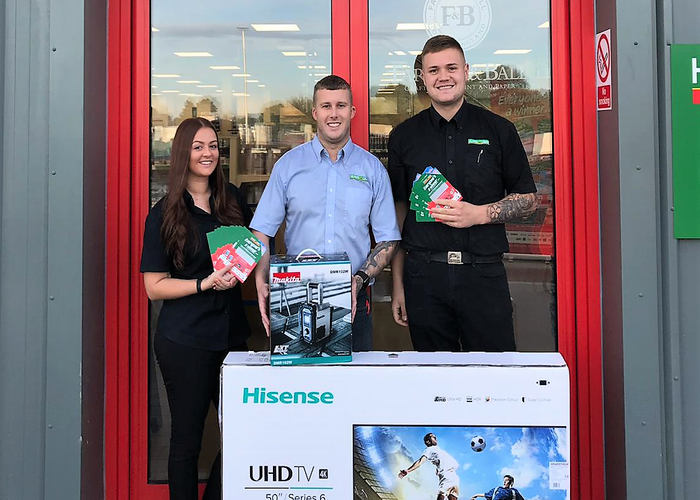 THE UK’S leading independent builders’ merchant has launched a bumper prize bonanza for customers and trade clients at its new Whitchurch branch.

The company is giving away hundreds of gifts including £2500 worth of holiday vouchers, tools, products and more from today (Monday) until Friday September 20.

The store will also hold an open day on Wednesday September 25, with more than 25 suppliers in attendance for a free hog roast, demonstrations and a special appearance by TV favourite, the Dulux dog.

Huws Gray only opened the 8,700 site – which includes a showroom – in June but has already had a positive response from the community.

“The first few months here have been incredible, and the numbers are growing all the time,” said manager Gavin Martin.

“That’s why we decided to come up with some fantastic special offers and a free event for the public.

“Anyone who spends £10 or more with us will be given a scratch card and the opportunity to win one of dozens of great prizes, in association with our trade partners.

“It’s another example of Huws Gray putting people first, and how we partner with industry giants to give back to our loyal customers.”

The Whitchurch branch was built on a three-acre site at Waymills, which had lain empty for years.

There was great demand for another Huws Gray outlet in the region, to complement nearby sites in Wrexham and Shrewsbury, and with eight staff working at the store their arrival has given the local economy a boost.

Now employing 1,800 people at more than 100 sites across the UK, the Llangefni-based organisation has had a successful 12 months, acquiring Ridgeons – which had 40 branches across East Anglia – and holding a GIANT trade event in Colwyn Bay, which was attended by more than 1,500 people.

Managing Director Terry Owen says growth and job creation are pivotal as the business moves forward, but the consumer experience is at the heart of all decisions.

“The reason we have been successful is because we put our staff and customers at the forefront of everything we do,” said Mr Owen.

“This campaign is for people in the Whitchurch area who have been behind us since we arrived, and we are thankful for that.”

Makita, Reisser, Dandy’s topsoil, Sherwin Williams, Velux and Wavin are among the firms supporting the campaign and supplying prizes and incentives. Others exhibiting on the day include DeWalt, Pavestone, Ronseal, Dulux Trade and Rockwool.

For more information, visit the website www.huwsgray.co.uk or call the Whitchurch store on 01948 258303.