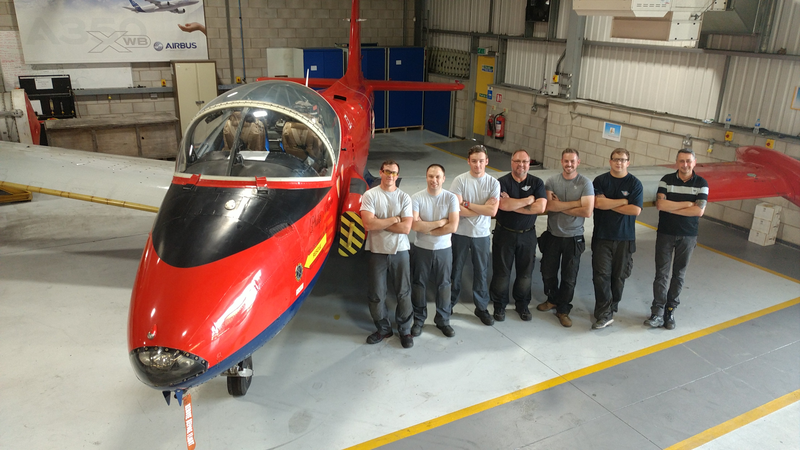 ENGINEERS are reaching for the sky thanks to the boss of a top UK airline.

Mr Meeson, whose nephew is completing an aerospace apprenticeship with Cambria and Broughton-based wingmakers Airbus, donated his own personal jet to the college’s Deeside campus.

Nick Tyson, Assistant Principal and Director of Learning, said the plane will add another dimension to the award-winning department’s innovative delivery of work-based learning.

He thanked Mr Meeson for the gift, and added: “Having the Provost T5 on campus is a major selling point for our engineering courses as it gives students hands-on experience of working on an airplane.

“We can use it to train our aerospace apprentices – of which we have more than 180 every year – and those studying on our higher education programmes and summer school qualifications.

“They’ll be able to look at structures, carry out live aircraft function testing and work out aircraft processes directly, so it will be incredible training for them.

“I would like to thank Mr Meeson and for his kindness, we all appreciate his generosity and look forward to many years of working on the jet plane.”

The Provost was used by the Royal Air Force from 1955 to 1993 as a British training jet before later being developed into a more heavily armed version for ground attack missions.

With a maximum speed of almost 440mph, the aircraft is around 40ft long with a wingspan of 35ft.

Mr Meeson said: “I am very proud and pleased to donate my Jet Provost aircraft to Coleg Cambria and that it will be used to train Airbus apprentices.

“I know the college provides a fantastic start for the Airbus engineers of the future and I am delighted to have been able to make this contribution.”

Up to 25 further education lecturers came together for a packed programme of workshops and activities centred on best practice and innovative learning methods, including an advanced manufacturing visit to Airbus.

For more information on the wide selection of courses and apprenticeships in Engineering at Coleg Cambria, and the summer school programme, visit www.cambria.ac.uk

Attached also is a pic of Geoffrey Peacocke (Airbus apprentice and Mr Meeson’s nephew) with Airbus apprentices, Weald Aviation and Mark Kiberd, an Aerospace lecturer at Coleg Cambria. This team effectively dismantled , transported and re-assembled the aircraft at Deeside